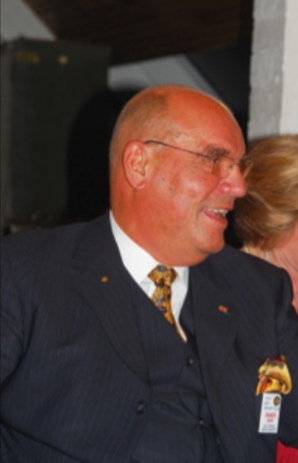 Rainer was inducted into Rotary in 1990 prior to moving to Hout Bay and was a member of the Rotary Club of Tokyo, Japan.  His Rotary service with the Hout Bay Club commenced in 2003. For years, he had wanted to live in Hout Bay, having visited the Cape Town area previously.

In the tradition of the Hout Bay Club, soon after joining, Rainer was asked to give a ‘life story’ talk to the Club.  The account of his career was fascinating. Born during the Second World War, his father served in the German Army and Rainer, as a young baby, was moved around Germany from place to place having vacated the family home in Berlin.

With the cessation of hostilities, the Jahn family returned from East Germany to their Berlin home only to find it occupied by another family. One can hardly imagine the distress at such a happening.

Rainer, on leaving school, entered into an apprenticeship as a motor vehicle engineer and joined the Daimler Benz company. He subsequently, with hard work and diligence, rose through the ranks of the industry and was posted to various locations, mostly in the Far East. He finally became the Chairman of the Board, Mercedes Benz, Japan.

His semi retirement brought him to South Africa where he continued with his connections to the Mercedes Benz family by obtaining a franchise. Rainer, Ursula and the boys moved to Hout Bay.

Rainer was never shy to join in with Rotary projects, for a number of years and together with his son Thomaz, they were the marshals during the Argus Cycle Race which brings in funds to Rotary, being positioned at the dangerous bend just above the Chapmans Peak Hotel.  Rainer’s experience at this vital and difficult location was invaluable with his sharp mind and subsequently the area became known by the Club as ‘Rainer’s Bend’.

Operation Medical Hope, Hout Bay Rotary Club’s largest ever undertaking, called on Rainer to assist, a call that was readily accepted. So started a long, happy, fruitful and special connection with this successful HIV/AIDS project which was also frequently the recipient of generous donations from Rainer.

Hout Bay Rotary Club’s Ashley Kaimowitz Memorial Fund started the Nonceba Counselling Centre for raped and abused children in Khayelitsha.   Rainer, after a visit, was a great supporter of the project and regularly made substantial contributions. The Nonceba Trust recognised Rainer and Ursula with a leaf on an ‘honours tree’ with the words, “For the love of the children, Rainer and Ursula Jahn”.

Rainer was ever mindful of the need of further education and he added his support together with contributions to the Club’s very active bursary project.

As a Rotarian, Rainer did not shy away from ‘difficult’ and controversial issues. He was always prepared to state his case in a forthright manner. He said he enjoyed Rotary because he said there were hard working professionals on the ground giving effect to his benevolence and getting the job done.

His interests and his kindness spread far beyond Hout Bay, particularly with his concerns for wild life and the local populace around his game ranch near the Kruger Park. Together with friends in the area, he was involved in a number of far reaching projects for the betterment of the local population.

How hard it is to say goodbye -but how easy it is to remember Ursula and the boys and a true Rotary colleague and special friend.

Rainer will be remembered for the good and wonderful things he did and for his kindness to others.

I expect to pass through this world but once;

any good thing therefore that I can do,

or any kindness that I can show to any fellow creature,

let me do it now; let me not defer or neglect it,

for I shall not pass this way again.